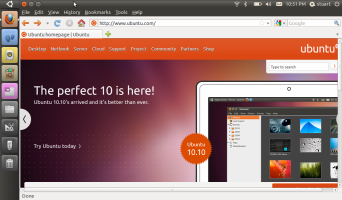 It's slow.
I was trying this on a Dell Mini 9. It's not a new netbook, but it's Tier One supported hardware. Ubuntu itself is quick to boot -- I looked away while it was restarting and found it had booted when I looked back. Browsing seems relatively quick. Youtube videos play without stuttering.
Yet, the Unity interface has got to be the slowest way of launching programs on my netbook. When I click them, I'm never sure if I did it successfully because it takes so long to load them.
Weirdly, it's worse for the built-in parts of the interface. Want to launch a program that's not in the dock? Click the Applications button, and wait while it populates the list of all your applications. Want the 'hub' (the menu that launches when you click the Ubuntu logo)? That's not instant to launch either. Overall, it's lacking the speed I would expect from a final release.
It's inflexible
The 'dock' (they don't want you to call it one) is always there. You can't hide it. You can't resize it. It's a permanent fixture of your screen, so you'd better learn to love it.
One of the ideas of the dock placement down the size is that it saves vertical space, which on a netbook is more precious than horizontal (more vertical space means less scrolling). Unfortunately, it also means you have less horizontal space, meaning the space available to my browser is less than the 1024 pixels most websites have come to expect. That means I permanently now have horizontal scrollbars which means: less vertical space. Urgh. How many netbooks have a screen resolution wider than 1024 pixels? Doesn't that mean that everybody will have this problem?
It's buggy
Once you push an application into full screen (perhaps you're sick of scrolling), the dock helpfully animates itself out of the way. When you leave full screen mode though, the icons are now halfway down your dock. Why's this? Dunno. You have to drag them back up to the top if you want to see them all.
When you open an application that's not already on your dock (and you want to put it there), you're meant to be able to right click it and add it. At least, that's what happens with the built in apps, like Solitaire. But if you install Chrome or Skype and want that? Nope, it won't work. You can't drag the icon from the Applications folder, so don't be trying that either.
And when you launch an application, its title is meant to go to the top frame. In my experience, the title just disappears, leaving you with a mysterious File menu up there instead. Lucky I can tell what application is open by looking at the little arrow indicators on the dock, eh?
In Summary
Unity is not ready for the prime time -- at least not on my Dell Mini. The version of Ubuntu that came with it worked fine, albeit anciently. The latest version also ran acceptably, although it chewed the battery like nothing else. The netbook version of 10.10? Well, it's barely usable. It lasted one evening before I wiped it off.
Posted by Stuart at 10:21 PM